The History Of The Wedding Bouquet.

It's one of the highlights of the reception, the bride gathers together all unmarried guests, turns her back to the crowd and flings her bouquet into the air. A scramble ensues before the victor emerges triumphant. With the bouquet in her hand, its physical presence is accompanied by the knowledge: this particular lady is destined to be the next to get married.

But there may not be such a willingness to catch the bouquet if it featured copious bunches of ripe garlic, dill and thistles, yes, that's right, the history of the wedding bouquet is chequered with less appealing options than we're familiar with today!

Back in the Plague years, brides got into the habit of carrying heavily scented bunches of garlic and herbs. The reason? These bouquets helped to cover up the general stench that lay around them and also ward off evil spirits (and, inevitably - death). Quite simply, the smellier the bouquet, the better. 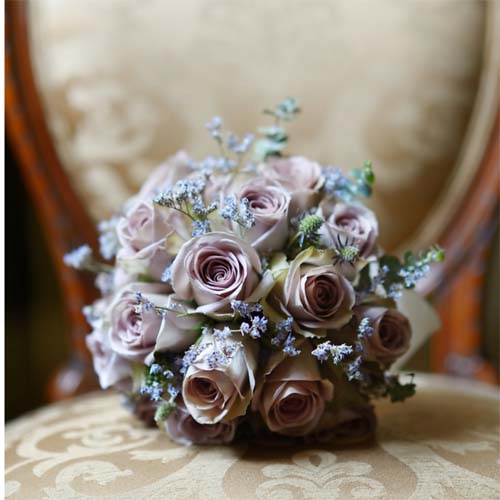 The tradition of carrying a bouquet of herbs has been around since the ancient Celts, who wore garlands made up of local flora such as ivy, thistle and heather. These were believed to have mystical, protective powers. For hundreds of years, brides across Britain (and Europe) adorned themselves with locally-grown, heady bouquets. These had the effect of masking an unpleasant body odour (a monthly bath was a luxury back in those days). They were also believed to symbolise renewal and protection from evil. Certain herbs, such as dill, were also known for their aphrodisiac qualities. The bride and groom were encouraged to consume this part of the bouquet during the reception in order to promote sexual desire and reproduction.

It wasn't until the early Victorian era that pungent, edible garlands got replaced with sweet-smelling flowers such as marigold, honeysuckle and roses. The Victorians loved this new tradition, but they didn't quite want to let go of the old symbols. So they came up with a 'flower language': each and every flower, herb and plant was allotted a certain attribute. For instance, camellias represented admiration and perfection; ivy represented wedded love and fidelity while white lilies represented virginity. The bride's choice of bouquet would set the tone for the wedding service. But pity the poor bride who walked down the aisle with a bunch of geraniums and oleander; they represented stupidity and caution, respectively.

Today, the 'flower language' is seen as a quaint tradition from the olden days, although florists still tend to know about it. Brides now usually choose flowers that match their colour scheme or hold some personal meaning for them.

Hopefully, that means that garlic arrangements are a thing of the past, but it doesn't hurt to take a closer look at the bride's bouquet before you rush forward to claim it.

Etiquette For Children At A Wedding.

Do I Need To Feed My Wedding Photographer.

Tips for getting your guests to participate in the wedding..

Get Featured On WPS

Get Your Images Featured On WPS. Submissions Open To Everyone.